Taking in the view from Grouse Mountain at Beaver Creek Resort, Colorado. 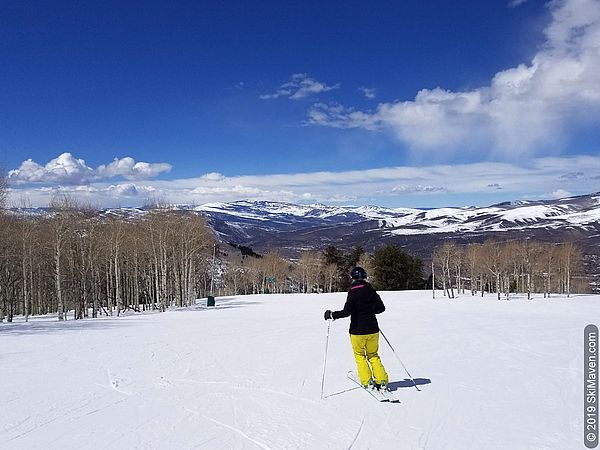 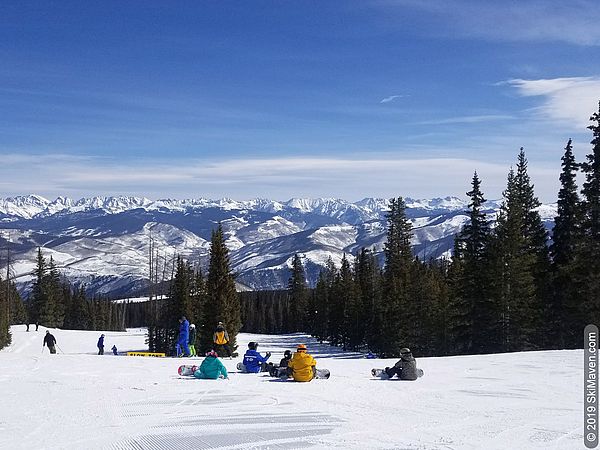 Ski and snowboard lessons with a view in the Red Buffalo area. 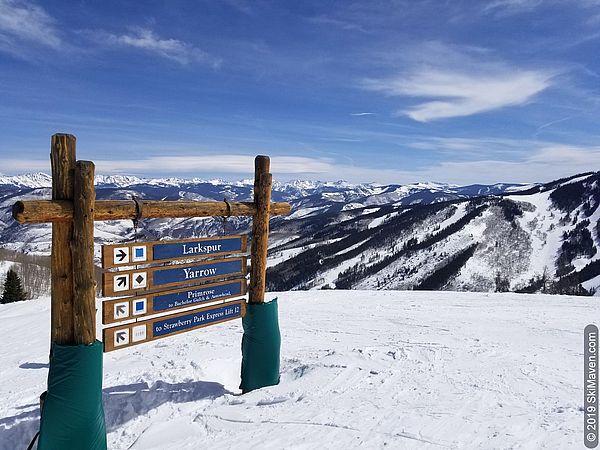 The scene from the top of Larkspur Bowl. 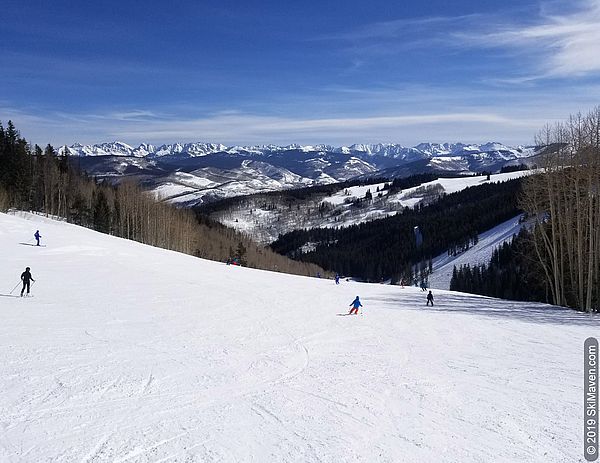 Skiing down into Rose Bowl. 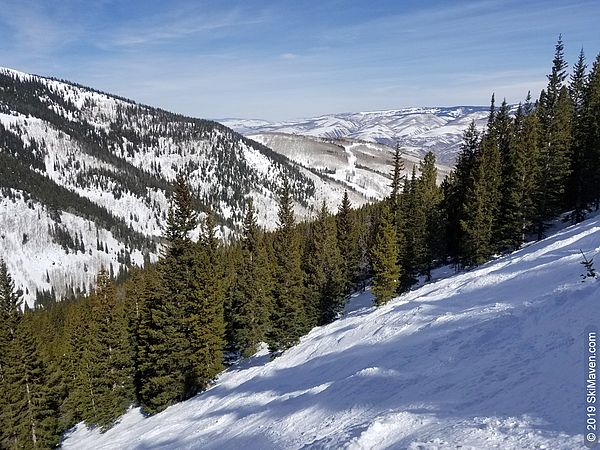 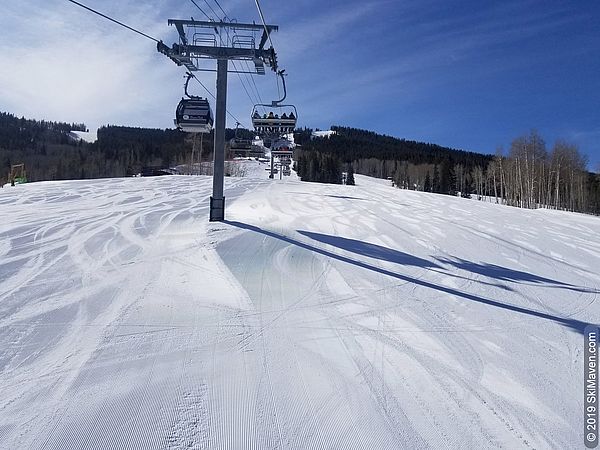 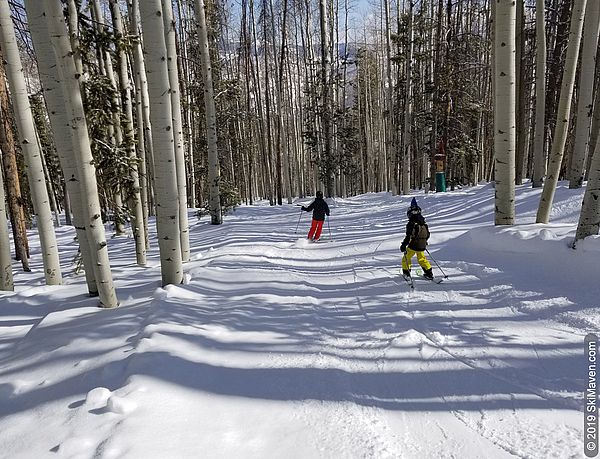 Skiing through the aspens on Via Vito. 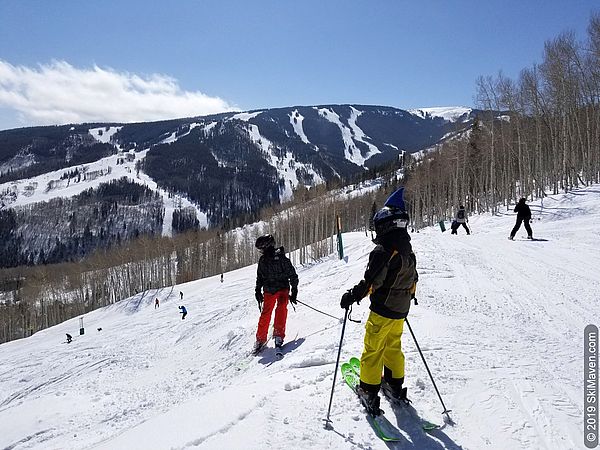 Assessing some moguls at Bachelor's Gulch. 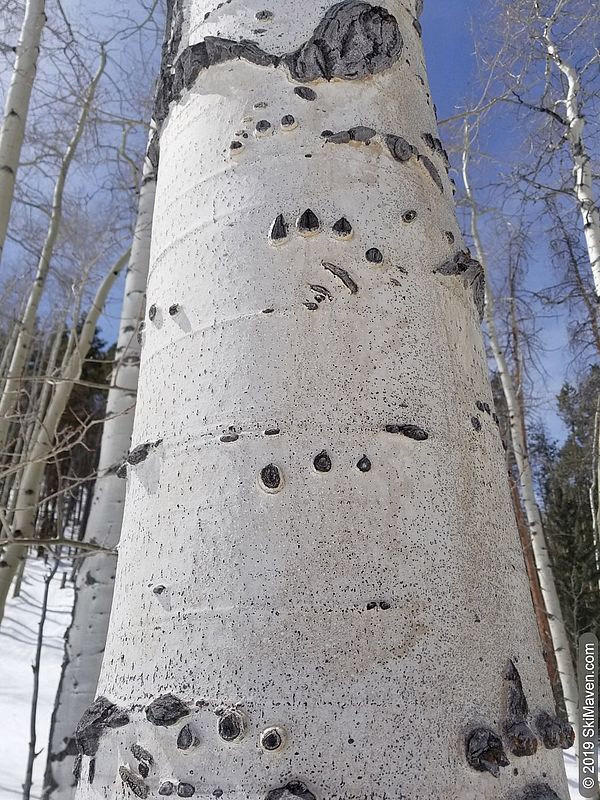 Evidence of some furry natives at Arrowhead. 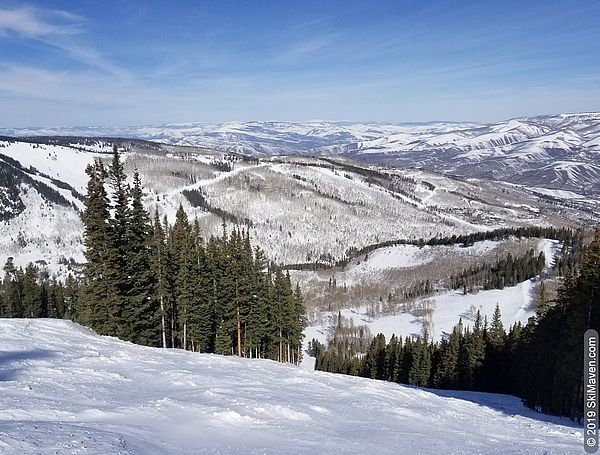 Steep bumps on Goshawk on the Birds of Prey trails.

The SkiMaven took a road trip to Colorado this week!

I enjoyed bright blue skies, some fresh snow and some spring skiing conditions. I spent some time skiing at Beaver Creek Resort, which is in Avon, Colorado. It’s about 10 miles west of Vail.

Early in the week of March 25, I enjoyed a couple inches of fresh snow at Beaver Creek. The resort’s trails had a silky layer over them – whether they had been groomed overnight or not. Lovely!

I skied with a couple of young Speedmeisters. We hit a bunch of trials and glades in three areas on the western end of the large ski resort: Arrowhead, Bachelor’s Gulch and Strawberry Park. And I’m pretty sure the boys found every little jump on the sides of the trails!

These areas of the resort have some wonderful intermediate trails. They are family-friendly parts of the ski area. That’s not to say you will not find some bumps or glades to challenge you, however. We enjoyed soft, spring moguls on the Tomahawk trail and zipped through the glades in Via Vito and Sourdough's Slide.

Straight, tall aspen trees line the trails. I noticed that bears like to climb them in the warmer months; I spotted claw marks on some of the trees.

Beaver Creek has high-speed quad lifts all over the place. They whisked us up the hill quickly to make for a full day of skiing. I only rode a fixed-grip lift once when we explored the sun-soaked Settlers Way trail down to the Elkhorn Triple.

Later in the week I skied other areas of the resort after a couple more inches of snow had fallen. I started from Beaver Creek Village, which is the main base area of the resort. This is where many people stay in hotels and condos and you will find shops, restaurants, rentals and everything you might need for skiing. There’s also a skating rink in the village.

I took the Centennial Express Lift up the hill. The busy lift is an interesting mix of a six-person chairlift and gondola cars. I disembarked at the mid-mountain, which is called Spruce Saddle.

I then enjoyed wide, cruising turns down the Rose Bowl. It’s a popular, scenic bowl with fun undulations. I followed Stone Creek Meadows down to the chairlift. In this area of the mountain, the only way out is to take the lift up higher on the mountain. A couple of challenging bump runs also plummet down into the bowl, but they are far less traveled.

I rode the Rose Bowl Express Quad up toward the summit and connected with the Red Buffalo Express Quad. The Red Buffalo area is one of the special sections of the resort. It’s actually a beginner area at the highest part of the mountain at 11,440 feet!

After new skiers learn some of the ropes in Haymeadow Park at the base of the mountain (which includes a gondola for the beginner slopes), they can ride the lifts to the top and practice their skills with amazing views. Beginners then can either ski a long, winding novice trail down to the bottom of the mountain, or ride the Centennial lift down from the mid-mountain.

I later headed for a more challenging area of the resort – the Birds of Prey trails from the summit area. This is where Beaver Creek holds World Cup downhill races. I chose Goshawk, one of the trails here that is non-stop bumps. And it was quite steep! Not a soul was on it but me. I skied in the shady side of the trail so I could make turns in the lightest snow.

I wanted to try a gladed area I saw on the trail map so I descended to the mid-mountain area. I started down the groomed Harrier trail, which is fun to swoop down. But then I detoured into the woods to the skier's right of Harrier. This gladed area is called Stickline. I skied through the aspens and pine trees. It was mostly shady in here, but I stopped to admire the lovely morning sun shining through the tall trees.

Next stop was Grouse Mountain. This peak has so many moguls it looks like it has a case of goose bumps. The resort does groom one trail here – Raven’s Ridge – which runs the length of it. But I was headed to the side of the peak that is called Royal Elk Glades. Here I found a long stretch of bumps in the trees. Challenging and fun!

Later I also picked my way down through the moguls on Bald Eagle and Falcon Park. I looked for light powder on the shady edges of these rather steep slopes. Only one other skier passed me here.

I kept working my way west to the lovely Larkspur Bowl. It features a wide, sunny intermediate bowl that’s quite popular. And the views from the top are spectacular! You can see a long stretch of snow-capped peaks that include the Gore Range. While riding the Larkspur Express Quad you can watch people challenge themselves on a couple of short bump runs that spill down into the bowl.

By the afternoon the strong Colorado sun had worked on the snow surface – especially at the lower elevations – and I was making turns in spring snow. Swish-swish!

At the end of the day I relaxed in the cozy base area at Arrowhead. Here they have a patio where you can sit under umbrellas or soak up the afternoon sun. You can order a beverage or a snack at the Broken Arrow restaurant. Beaver Creek has many patio options for lunch or apres ski.

Life is good in sunny Colorado!

Beaver Creek Resort at a Glance