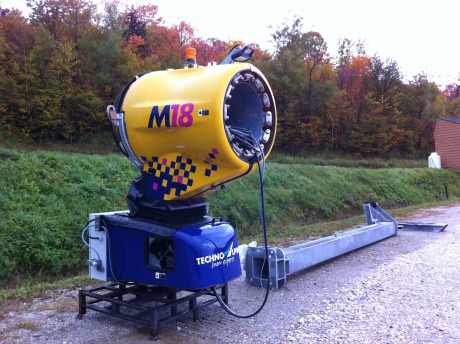 Next up in our series describing on-mountain, skiing-related improvements at Vermont ski resorts is Killington in central Vermont. 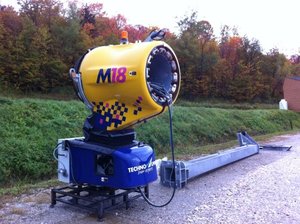 Snowmaking upgrades topped the list of summer mountain improvement projects at Killington, including energy efficiency upgrades, pump re-builds, trunk line replacements, and a new cooling system at the South Ridge Pump House. The resort's been building up its arsenal of lower energy snow guns, including two new fan guns for the bottom of the Superstar and Snowshed trails. They've also been applying a coating to the inside of pumps to reduce friction and the energy needed to pump water throughout the 88-mile-long snowmaking system.

Excavators and backhoes were busy on the hill working on trail regrading, including in the Great Eastern / Bittersweet area to improve skier flow and reduce congestion at the intersection. They also blasted rocky areas into submission on the Great Eastern Trail, near the top of the Needle’s Eye Express.

The Superstar Express got a new control room and electric drive control. The resort is also replacing seat cushions on a number of chairlifts (ahhh...). Crews created the Peak Walkway to get skiers from the top of the North Ridge Triple back to the top of the K-1 Gondola.

And also for this 2010 / 2011 ski season, Killington crews are moving the Superpipe at Bear Mountain approximately 22 feet to the west to accommodate making a larger, Olympic-sized pipe (500 feet long with 22-foot walls).

And what did you accomplish this summer? Hmmm?

Photo of one of the new snowmaking fans courtesy of Killington Ski Resort.