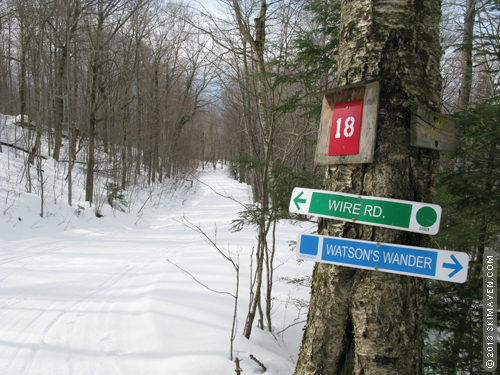 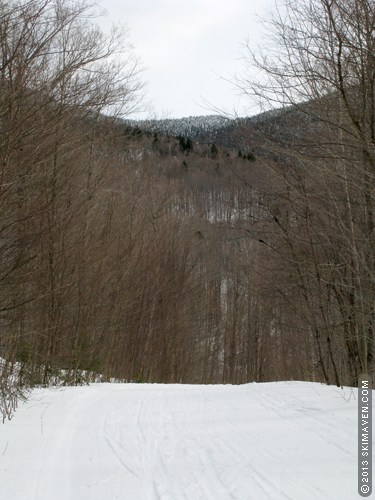 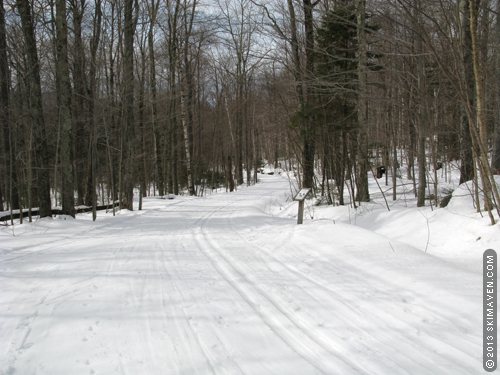 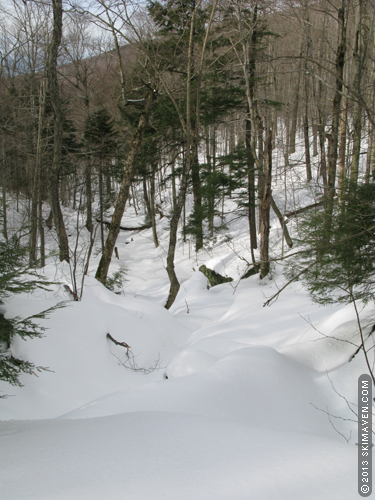 A snow-covered stream along my descent. 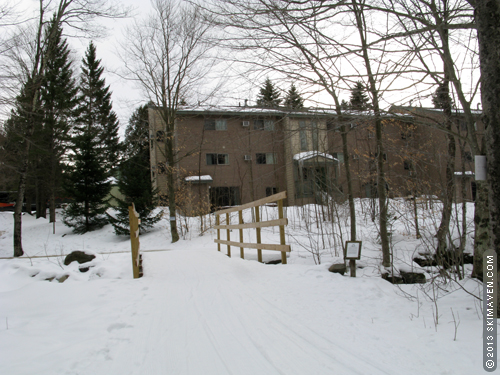 The Langlauf trails passes condos on way back to Nordic center.

Did you know Smugglers’ Notch has a Nordic trail network? Well they do, and it’s quite nice.

On Sunday afternoon, after finishing some house chores, I took off for a warm, spring ski. I wanted a location that was rather high and not baked by the sun, so after getting a ticket and consulting the trail map, I set my sites on the highest trail in the network.

It was mostly sunny and warm on Sunday, so I only needed a zip top on and I was not wearing gloves. I carried water and a snack, hoping that I could take a break in the sun somewhere on the trail. There was still quite a bit of snow here above 1,000 feet (about 6 - 8 inches on the sides of the trail).

I skied up Lower Loggers, climbing two steep but short hills and crossing a dirt road along the way. I then hooked up with Crossway and Upper Loggers to continue my gradual climb up toward 1,400 feet.

The hardwood forest was very pretty. I noticed that the snowshoe trails were well-used here — probably more so than the ski trails.

I connected to Watson's Wander — the outermost trail on the east side of the Nordic network. It climbs to the highest point here, 1,740 feet. It was now time for my reward: the downhill!

I zoomed down a rather steep hill to a stream and then climbed out of the stream gully and contoured around the side of a hill. The sun was now directly on this part of the trail so I stopped for a break and some Vitamin D. I also applied glide wax to my skis to get as much gliding as possible on the trip down.

With some double-pole pushes and kicks, I descended to Wire Road and headed for the base of the Morse Highlands beginner chairlift. I got a few curious looks as I passed the lift area because of my Nordic gear.

This loop provided plenty of mellow climbing and then some fun downhill gliding. I got back to the Nordic center on the Aspens, Reservoir Tracks and Langlauf trails, which skirt the backside of the condos. The trail also followed a pretty little brook.

The Skimeister has been on the western/lower side of the trail network before. He says there are nice mountain views from the meadows down there.

This was a great way to end a weekend of spring skiing. Unfortunately right now it's raining and warm. Grrrrr. Colder weather returns tomorrow. Hopefully we don't lose too much snow!