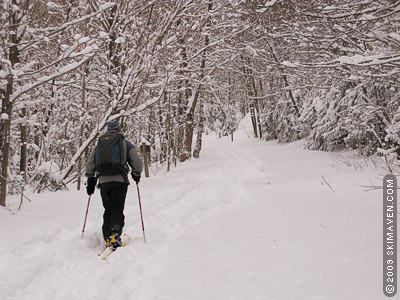 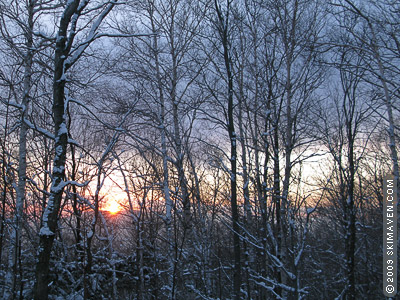 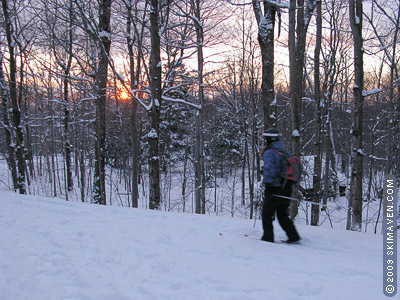 The Skimeister and I started work early this morning with the goal of ending early. I'm happy to say we were able to squeeze in some late-afternoon turns on the western side of Mt. Mansfield. We climbed the CCC Road (built by the Civilian Conservation Corps) from Underhill State Park.

Things were looking a little snowy at the bottom, but they got better about half way up the road. I'd say down below there was four inches of powder, while about 7 inches of snow carpeted the dirt road and coated the branches at the top of the road, where the hiking trails branch off for Sunset Ridge.

After a long climb, we were treated to a sunset that had just revealed itself under the clouds. The light was very pretty. We put on some extra layers and enjoyed a decent filled with powdery turns. With the mellow terrain, fresh snow and my plastic tele boots, I was doing some of my best telemark turns ever. I was figuring out that in these boots I can put a lot of my weight on my back foot as it flexes. What a difference that made!

The road was well covered, and for the most part the sidetrails were too. We both found a few rocks, however, that still require more snow to bury.

I have to say that snowy sunsets are a great way to end a busy work week.