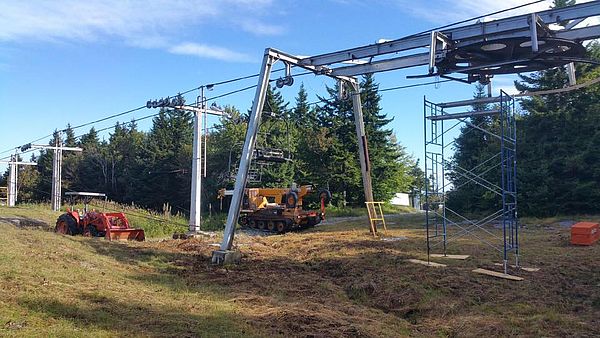 We're taking a look around the Green Mountain State to see who is doing what to their resorts for the coming winter. Let's get started by looking at the improvements at ski areas in southern Vermont.

Volunteers have been working on a new warming hut at the base of the rope tow. They've also be clearing trails and preparing the area for the winter season. More work days are planned for this fall. Check their Facebook page for info.

Bromley is implementing a “Go Green” initiative this winter season. The intent is to eliminate organic waste and all recyclables from the Bromley dumpsters containing refuse destined for the landfill. Also in preparation for the ski season, new paint has been applied on some of the base area buildings. Bromley will also be making use of a new-to-them Pisten Bully 600 E+. It's a hybrid snowcat with a diesel electric drive. The resort is also replacing the nozzles on its SV10 snow guns to improve energy efficiency.

Magic will be under new ownership in 2016-17! Ski Magic LLC is purchasing the ski area with an initial five-year plan to invest capital into lifts and snowmaking. They are now doing repair work to re-open Magic’s second summit lift (the 5,000-foot-long Black Triple Chair), which has not operated for the last two years due to insufficient financial resources to complete the work required by the Vermont Passenger Tramway Board. They are also repairing and expanding snowmaking coverage. Magic plans to be capable of making more snow, earlier than ever before, on both sides of the mountain. There will also be a new daycare facility and some refurbishing to the lodge and Black Line Tavern. Volunteer days will be held this fall to help prepare for the upcoming ski season. 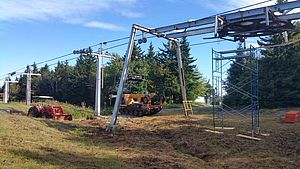 Mount Snow is increasing the uphill capacity in its beginner terrain park by 50 percent by replacing the Ski Baba Lift with a 400-foot SunKid conveyer lift called Grommet (Lift One). Mount Snow has been overhauling and updating the snowmaking valve house at the top of the Beartrap Lift to improve snowmaking efficiency around Carinthia. The resort has replaced 7,000 feet of snowmaking pipe with an additional 13,000’ scheduled to be updated before the lifts spin. The resort also took advantage of a dry spring season by increasing its trail and glades work. More than 1,600 hours have been spent pruning, mowing and clearing new lines through tree skiing areas in preparation for this winter. The resort is expanding composting around the ski area, as well.

Okemo is expanding its snowmaking system this year with 18,000 feet of new pipe to introduce snowmaking on Catnap and Suncatcher in the South Face area. Upgrades also include $30,000 of new snowmaking hose.  A Prinoth Bison X park cat is the newest addition to Okemo’s fleet of grooming machines. New park features such as cross courses, flow parks and mini pipes and new jib features will debut in Okemo's parks. Base lodge improvements include new carpeting and paint. Also, rental equipment upgrades include 515 new skis, 153 snowboards and more than 1,000 pairs of boots.