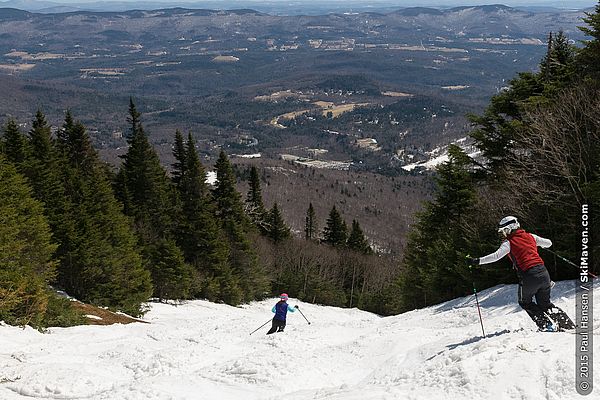 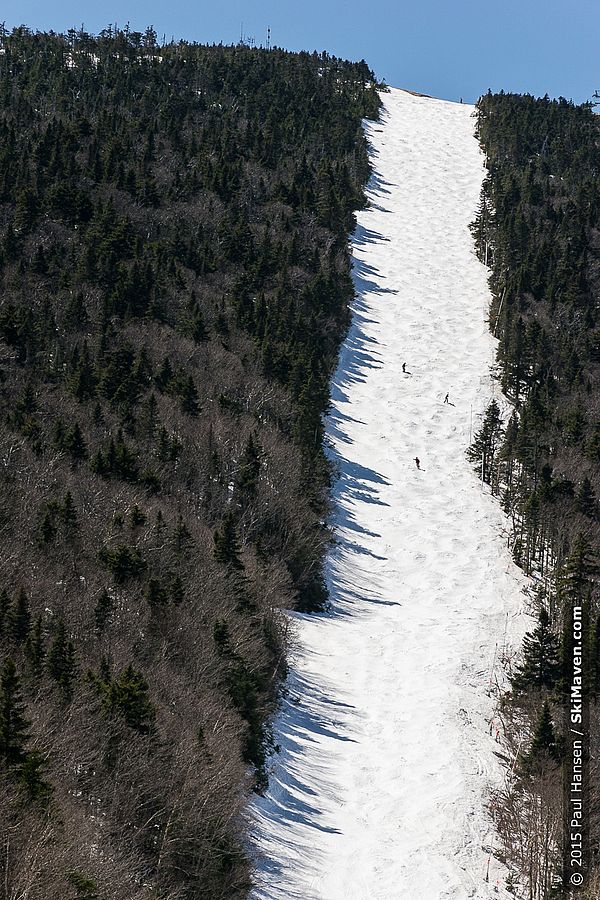 Good coverage and many, many moguls on Organgrinder. 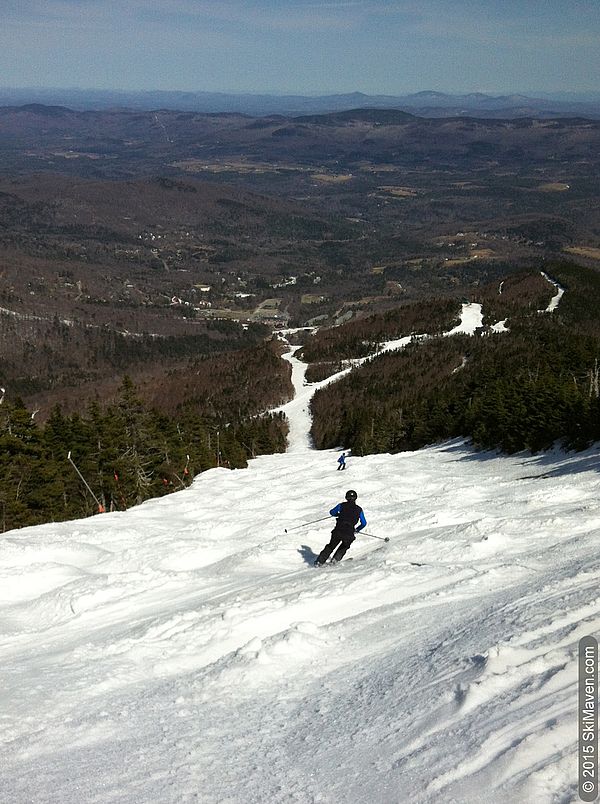 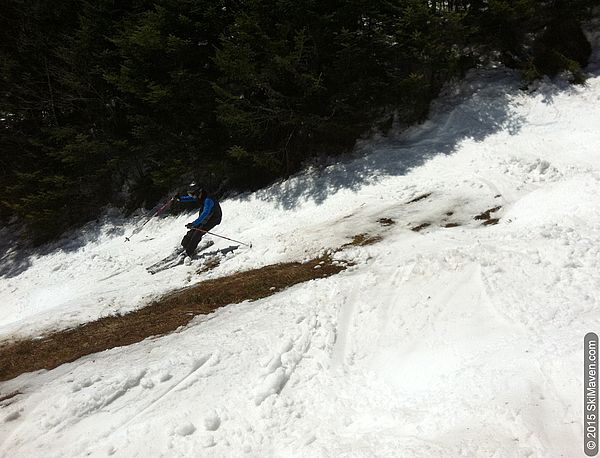 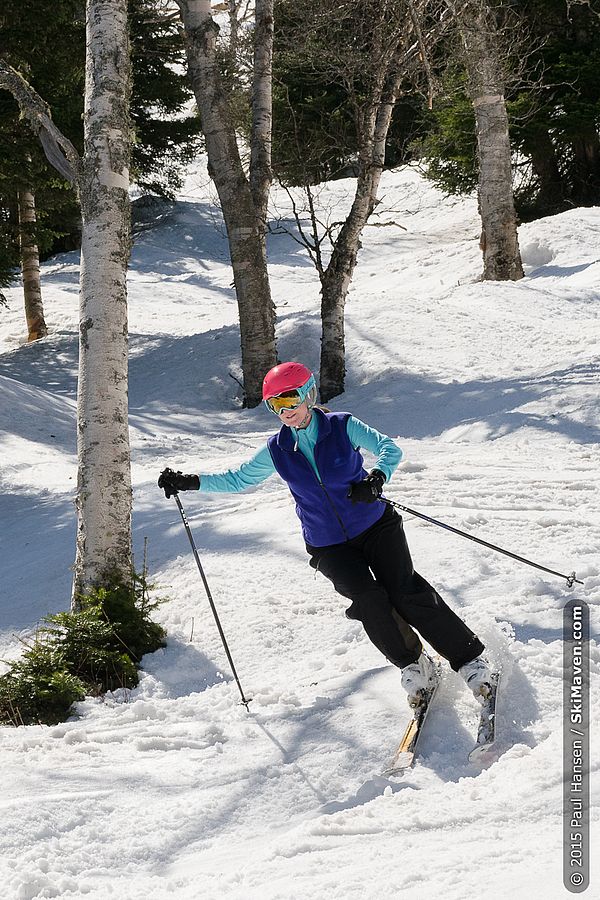 Skiing through the trees on the Paradise trail. 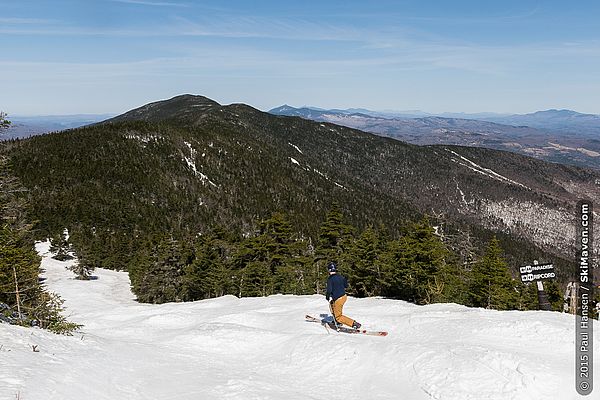 View to the north from the top of the Paradise trail. 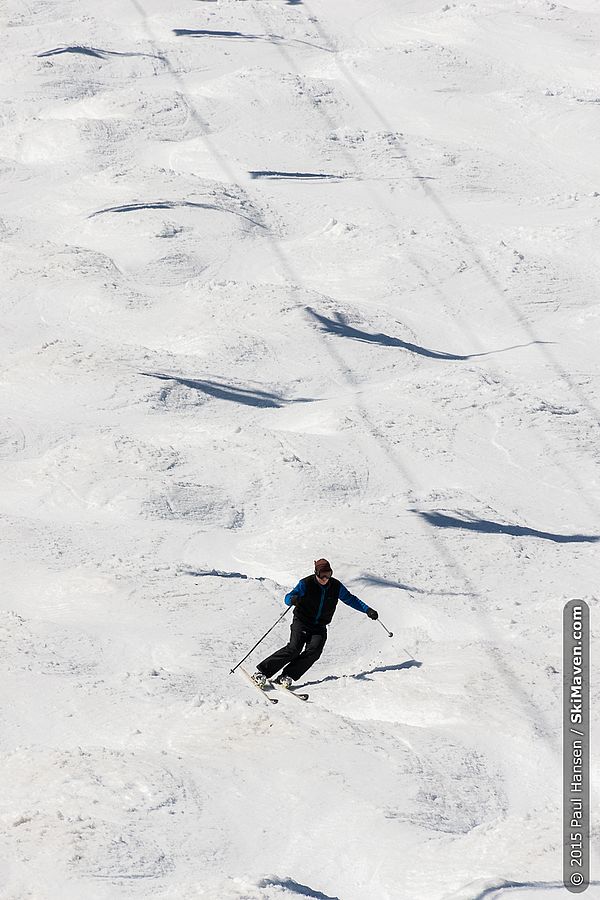 Spring bumps on Ripcord under the Heaven's Gate Triple.

With freshly waxed skis in tow, we headed to Lincoln Peak at Sugarbush Resort in Warren, Vermont, on Thursday. The forecast was flawless; we just had to go!

Three lifts opened at 10 a.m.: The Super Bravo Quad, the Heaven's Gate Triple and the Castlerock Double. We enjoyed runs off of all three. With warm temps and sunshine, I commented that the most chill I got was while riding the zippy, high-speed quad! The rest of the time we were working our way down corn-snow-covered bumps and doing corny GS turns. I was plenty warm in a long-sleeve top and a vest.

We had fun runs on Organgrinder, Paradise, Murphy's Glades, Jester and on Ripcord (here the bumps were spaced very far apart, perhaps because of snowboard traffic). There were great views of Lake Champlain, the Adirondacks, and peaks up and down the spine of the Green Mountains. On our final run of the day we made a point of stopping frequently to take in the views.

Castlerock features only natural snow so its sunny trails were really melted out but we had fun on the super-soft bumps of Middle Earth while avoiding spring "features." The final stretch of the trail was a hand-shoveled strip of snow and the road that brought us back to the main base area was challenging because it was melting out. One run was enough for Castlerock today.

Skiers were soaking up the sun on the patio by Super Bravo, and in the afternoon the patio by the Castlerock Pub filled up. We re-applied sunscreen and sat in the sun to sip ciders and beers under blue skies. A sweet day at Sugarbush for sure.

Note about some closed trails: The resort has started work on removing the Valley House double chair — they are replacing it with a fixed quad that will load closer to the Super Bravo Quad. This week they decided that to do work at the top of that lift they would close Stein's Run and the other runs that are downhill from there, including Snowball and Spring Fling. You could imagine our surprise when we saw Stein's had not been skied recently. It's a rather iconic spring bump run.

Which Resorts are Still Open in Vermont?