Colorado's Arapahoe Basin on June 9--the day after closing.

Skiers who took the time to drive to Colorado's Arapahoe Basin on Sunday had a powder day to close out their ski season. Yes, it had snowed a couple of inches the night before at the higher elevations around the Continental Divide, which the ski area straddles. 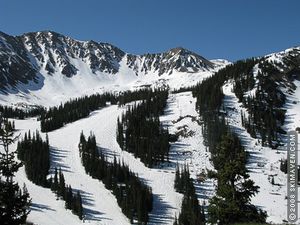 Sounds like American ski resorts had a great year all around. The National Ski Areas Association reported earlier this month that visits this season topped 60 million for the first time. The visits were up 5 million (9 percent) from the 55.1 million recorded in the 2006-07 season. The previous record was 58.9 million visits in 2005-06.

“It proves to us that snow trumps everything,” said Michael Berry, the organization's president, in an <link http: www.aspentimes.com article news external-link-new-window>Aspen Times article.

While in Colorado last week, I only had time to drive past A-Basin on the day after it closed. Nevertheless, I snapped a couple of photos and was amazed at the amount of snow there was still left to ski on.

I only had enough time to climb up past the Continental Divide sign and hang out with some marmots for a quarter of an hour. No signs of pikas, however. I think I would have had to hunker down for awhile in some warm clothes to catch them moving about. Perhaps they are still remaining under the rocks and earth until more snow melts? 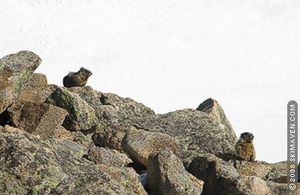 A-Basin is definitely on my list for the next time I ski in Summit County or the Vail Valley. I've only been there once in a hail storm (I had to eat my sandwich under the shelter of the low boughs of an evergreen tree). I'd love to ski there in the sunshine and powder in their new Montezuma Bowl, which significantly added to their high-altitude terrain.

Within days of this posting, the Rutland Herald reported that Vermont's final ski visit numbers were in and they were looking good. The Green Mountain State attracted 4.3 million skier visits during the 2007-08 ski season. The Vermont Ski Areas Association (VSAA) says that marks a 14-percent increase over last season. Wow!

VSAA credited this year's increase to terrific early-season snowfall; December was the fourth-snowiest month on record, according to the National Weather Service in Burlington. February brought a record 42.3 inches to Vermont, as well, as winter came in like a lion and continued to roar.