Among the on-mountain investments and improvements happening at Vermont ski resorts each year (we'll soon <link http: www.skimaven.com post on-mountain-improvements-at-central-northern-vermont-ski-resorts-for-the-2014-2015-season _top external-link-new-window for>recap all that is new at each ski area for 2014-15), some of the most exciting changes are often lift upgrades and improvements. Here's the line on lifts for the coming season. 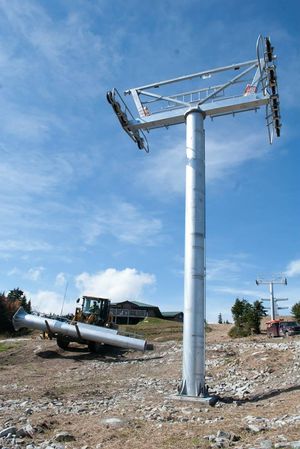 Okemo Mountain in southern Vermont is now installing a six-pack, high-speed lift. That is, six people ride the chair together. I've been on a couple of these and it's a bit more challenging to get everyone moving together toward the chair when the lift line is busy. Resorts install these in high-traffic areas to get people out of the lift maze. Okemo's new six pack will have a light orange plastic cover that you can pull down during inclement weather. Oh, and the Sunburst Six also has heated seats and it replaces the Northstar Express Quad. A new storage barn will corral the chairs each night.

Stratton Mountain has installed 58 shiny new gondola cabins featuring a rubber mounted frame designed for a smooth ride. The 12-person cabins have carpeted flip-up seats and exterior ski and snowboard racks. A new gear box was installed at the start of last season bringing the gondola refurbishing project in at about $3 milllion. Watch a 1.5-minute timelapse video of the project on <link http: www.youtube.com _blank external-link-new-window video>YouTube.

Sugarbush Resort has put more than $1 million into electrical and mechanical improvements for its lifts. If you've read a couple of our recent <link http: www.skimaven.com category sugarbush _top external-link-new-window posts>posts from Sugarbush, you'll see that this investment was essential. Here's hoping the improvements increase the reliability of having their chairlifts up and running every day of the ski season. Especially glorious powder days. Looking to the future: Sugarbush is in the permitting process for a new Valley House lift at Lincoln Peak. They are hoping to install a fixed-grip quad. 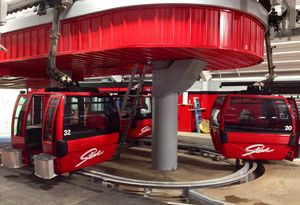 Stowe Mountain has refurbished its gondola cabins. Yes, they are still red, but they are looking showroom-new again. The top and bottom terminals have been spruced up and the gondola’s motor and other key mechanical components have been replaced. Over on lower Spruce Peak, you'll find the new Meadows Quad chairlift, which replaces the Alpine and Easy Street double chairs.

Stay tuned this fall for <link http: www.skimaven.com post on-mountain-improvements-at-central-northern-vermont-ski-resorts-for-the-2014-2015-season _top external-link-new-window for>recaps on all the on-mountain improvements at your favorite ski resorts in Vermont.