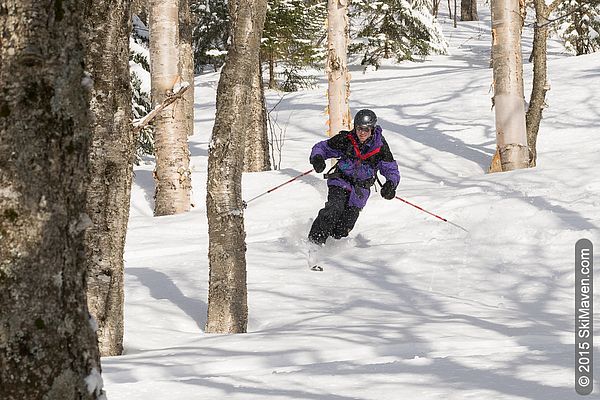 Skiing in the glades on Saturday. 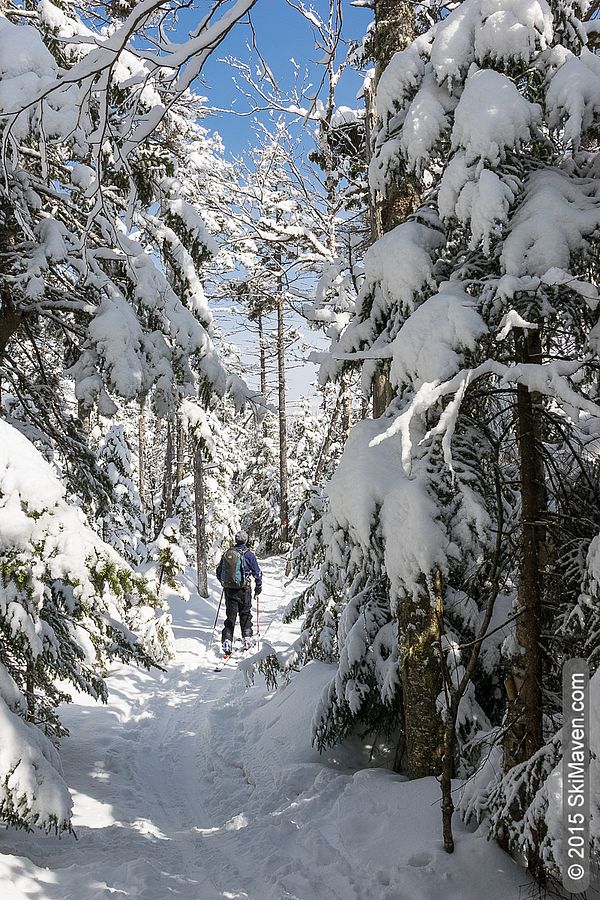 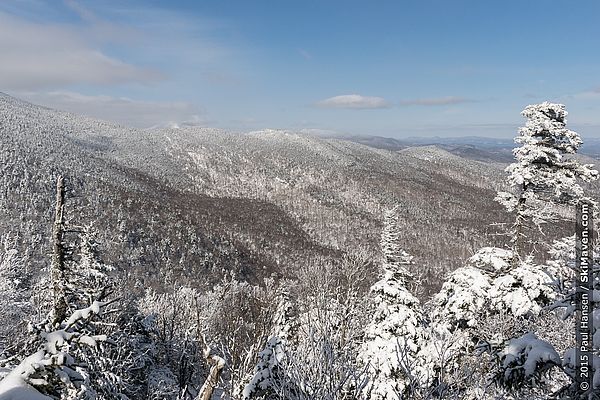 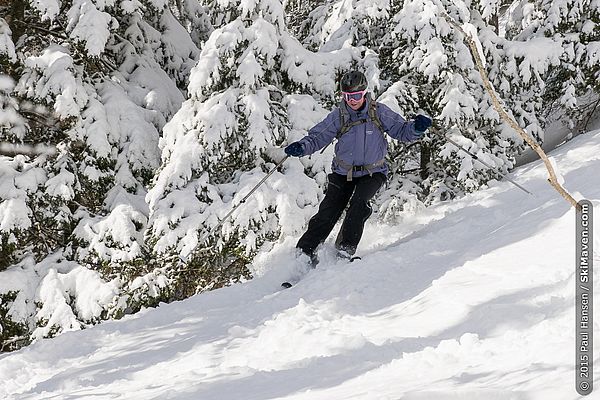 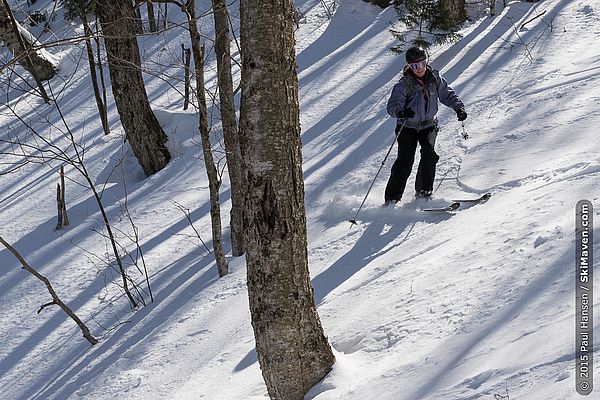 Sunday in the Cotton Brook area. 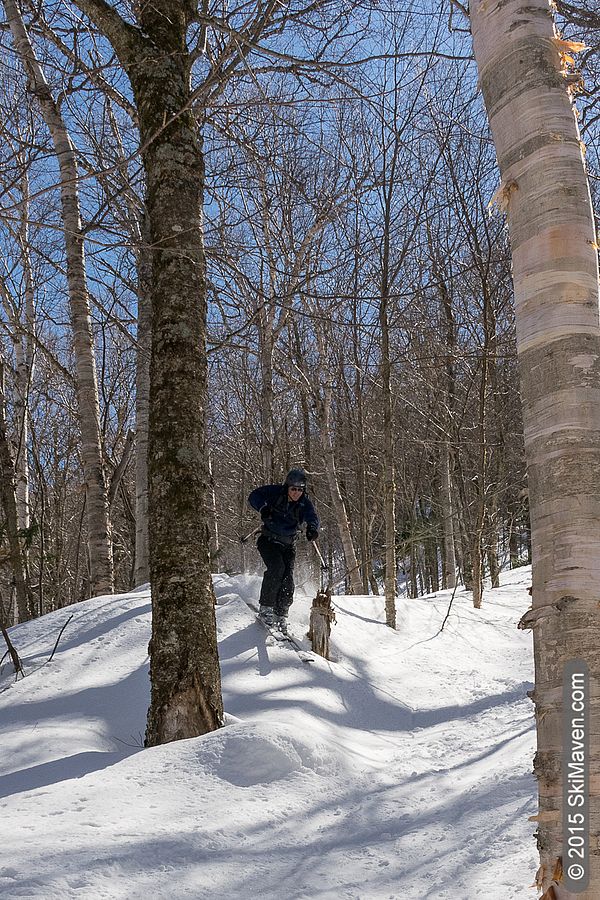 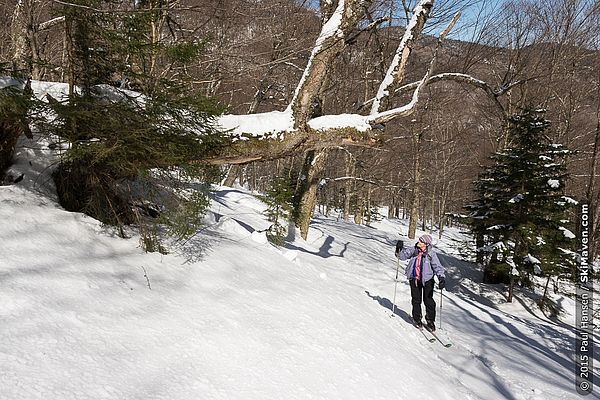 Climbing back up from the Cotton Brook side of the mountain.

The Skimeister and I got out to backcountry ski on Saturday afternoon and it was so much fun, we went for a second helping on Sunday!

Saturday was the cooler of the weekend days and some fresh snow from earlier in the week was blanketing the trees in northern Vermont's higher elevations. We headed for the backcountry trail network at Bolton Valley, Vermont. It looked like mid-winter as we used climbing skins to ascend about 1,500 feet to our destination: the Stowe View overlook at 3,000 feet. By early afternoon the sun was out in full force. Occasional gusts sent snow flying off the trees and down our necks. The white snow against the blue sky was stunning, and an unexpected surprise given the forecast!

Bolton Valley has a backcountry trail network that adds up to more than 85km of trails, and many more options that are left to your imagination! It's location up high in the hills makes it a great place for late-season Nordic skiing.

After taking in the snowy mountain view at Stowe View, we put on an extra layer and helmet and prepared our telemark skis and boots for a long descent. We pointed downhill from Stowe View and made plenty of fun turns. We found that the snow that had faced the sun for a while was getting crusty and tricky to turn in, but if we aimed for shady areas, the snow was still cold and dry.

We finished our afternoon tour after 4:30 p.m., but at this time of year that is still very sunny on the many Bolton trails that face west. We decided to grab a beer at the Bolton Valley Resort pub. We sat by the windows and watched downhill skiers schuss in the remainder of the day's sunshine (they have night skiing at Bolton, but no lights are needed at 4:30 in late March).

By the time we awoke on Sunday we knew that we just had to go back for more backcountry skiing fun. The weather on Sunday was forecast to be sunny and warmer, and this was just too good to pass up. It's so nice to climb and ski when you don't have to worry about getting cold. You feel like you can hang out on the mountain more and enjoy the views. And making turns in the sun is always special!

With sunscreen applied and fresh bagels in our packs, we decided to buy a single-ride lift ticket for Bolton Valley's Wilderness Chair. This would get us up high so we could lessen the climbing to get to the height of Stowe View again. But our goal today was to ski part of the Cotton Brook Trail on the back side of the backcountry trail network. It would require that we make the steep climb back out of the Cotton Brook area so that we could return to the Bolton Nordic Center at the end of the day.

We got off the chair and zipped down the Peggy Dow Trail to the entrance to the trail network. We put climbing skins on our skis and went up and down along the Heavenly Highway and Paradise Pass trails until we saw the wooden signs for Cotton Brook.

We enjoyed some turns that usually featured snow that had been shaded by trees and the mountain (the trails faced east). My best turns were on the areas where there were a few inches of snow on top of a solid crust that was a nice base. I was doing parallel turns on my tele skis and really enjoying it!

Now, we had skied Cotton Brook in the past (<link http: www.skimaven.com post a-cotton-brook-backcountry-skiing-adventure _top external link in new>see our past post) and we knew that we had to keep our eyes out for a trail that would contour around left and bring us to an uphill climb back to the backcountry trails. We had to be sure not to ski too far down the mountain or we'd be headed for the Waterbury Reservoir!

Sure enough we picked up red blazes that brought us across the hill and then we found blue blazes that would mark the steep climb back up. Before the slog uphill, we enjoyed a bagel break in the sun.

I'd say we skied from 3,000 feet down to about 2,200 feet and then climbed back up again nearly that much. We noted how quiet it was on “the backside” of the mountain.

What a weekend. Spring skiing sure is great when you have a few inches of fresh snow to play in from earlier in the week!